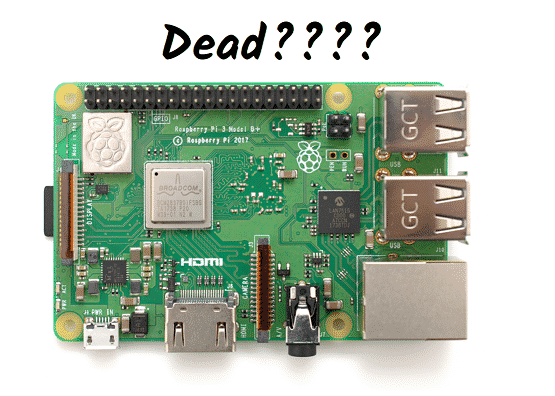 Among the Raspberry Pi series, Raspberry Pi 3B+ is most sensitive to its GPIO and its because of its PMIC quad power supply chip. PMIC stands for Power Management Integrated Circuit. There are various possible ways by which you might kill your Raspberry Pi. In 99% cases, recovery of dead raspberry pi is impossible. 1% chance if you are lucky!

How to decide a Raspberry Pi is dead or not?

Before concluding your the Raspberry Pi as dead, you should check some factors or “symptoms” of dead Raspberry Pi. As we know, there are two LEDs on Raspberry Pi board. One is RED indicating power and another GREEN for the ACT. Let’s understand the combination of these LEDs.

So, you have connected GND and VCC by mistake, most of the times, this is handled by the polyfuse present on the Raspberry Pi 3B+. If you are unlucky and polyfuse won’t break the connection, it is impossible to recover. In the case of connection of 3.3V and GND, PMIC comes in picture. The rails for 3.3 V will stop working and PMIC will not give 3.3 V output. Resulting your Pi will be dead. You can find more in this forum post.

There are silicon railing for 3.3V output in PIMIC. When you connect it with 5 volts even for milliseconds, it will kill your Raspberry Pi. Rather than milliseconds, the time of microseconds is sufficient for that.

As mentioned in raspberry pi forums, giving voltage more than 4 volts to Raspberry Pi GPIO will lead to killing your raspberry pi. The forum also says that drawing extra current from RPi might kill it.

Being honest, there is only a 1% chance to recover dead Raspberry Pi. As we know, Raspberry pi has multiple layered PCB. Hence, onboard component replacement is possible only when a damaged component is on either side of PCB, and that should be locatable, which means you have to find the fault by test points! Which is almost impossible.

One of the reason behind dead raspberry pi is faulty polyfuse. If the problem is the wrong connection between VCC and GND which leads to killing RPi, then safety fuse (Known as Polyfuse) might help you.

Leave your Raspberry Pi ideal for at least 24 Hrs, according to forums, it has self healing capacity. It will heal itself with given time period. Further, the post also states that, the healing becomes faster in cold temperature.

Another reason behind dead raspberry pi is damaged PMIC. If 3.3v pin on raspberry pi giving zero volts but 5v pin is alive and giving proper voltage, then 99% chances are your raspberry pi is dead. Not permanently, but the solution is very hectic and not implementable.

Most such cases include PMIC as mentioned in the above picture. When 3.3v pin on raspberry pi gives zero volt output, it means PMIC is damaged. You might think to change the PMIC on Raspberry Pi. But wait, even it is available on Aliexpress at $5, you can not use it. PMIC requires specific register values for defined work. But these values are not known and proprietary. So, even if you want to change it, you have to take one from working Raspberry Pi. Buying a $35 new board will be a simple solution.

A very thoughtful article to agree upon !

Glad to know that, this helped you!

Arduino Blue Pill ESP8266 Fingerprint Scanner GT511C3 Home Security IoT IoT Hardware Project NodeMCU OLED Display Peripherals Raspberry Pi Raspberry PI Troubleshoot STM32 Troubleshoot
scroll to top wpDiscuz
3
0
Would love your thoughts, please comment.x
()
x
| Reply
We use cookies to ensure that we give you the best experience on our website. If you continue to use this site we will assume that you are happy with it.Ok